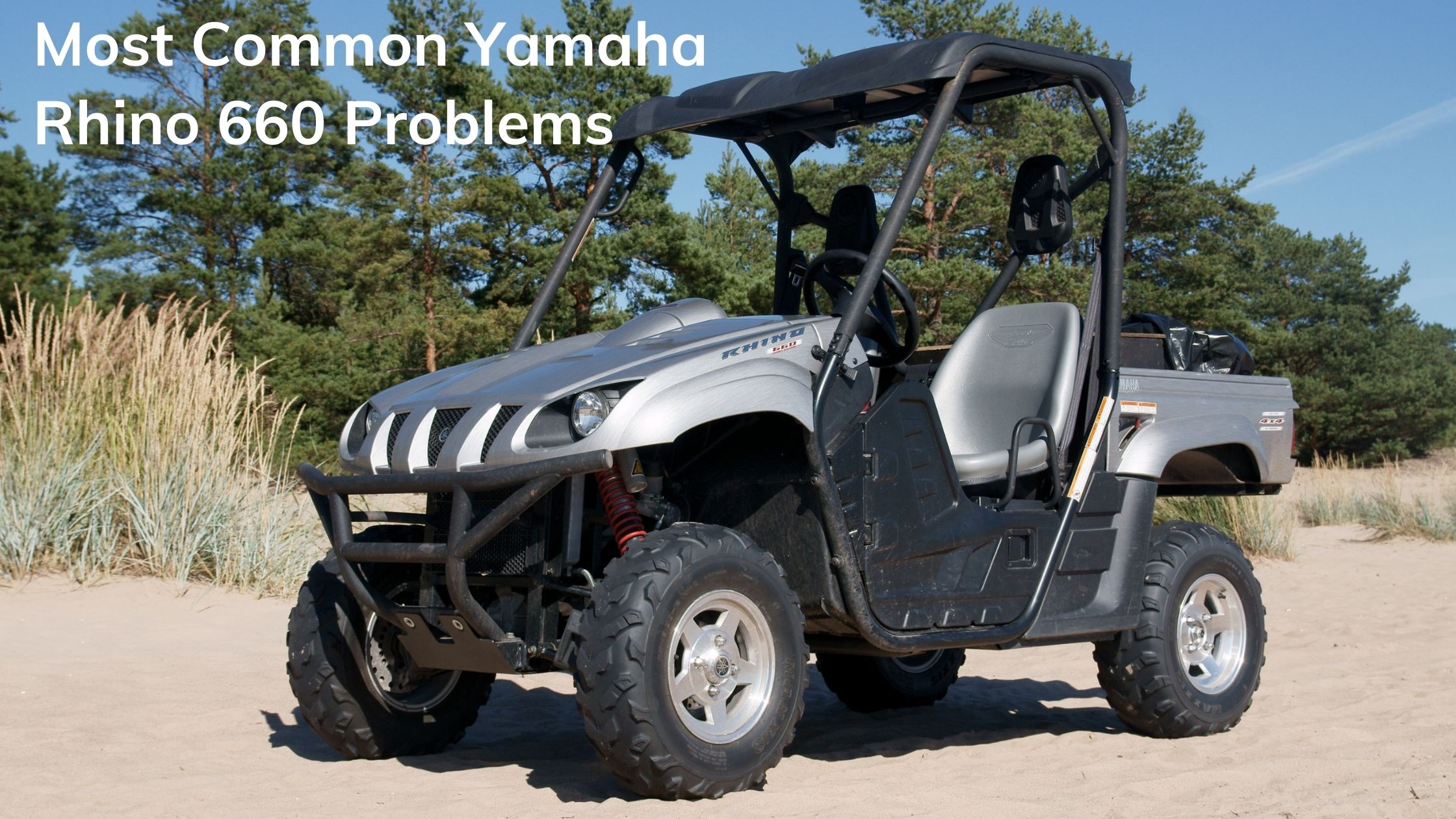 With 11 inches of ground clearance and 7.3 inches of wheel travel, Yamaha Rhino 660 is undoubtedly one of the best UTVs for driving on the roughest trails.

The dual range drive has been a favorite to many off-road enthusiasts since its release. But like every great vehicle, it also may face some troubles.

Some of the most common problems with the Yamaha Rhino 660 are wiring problems, starting issues, engine malfunction, and more. Not to worry as these problems have solutions too.

Today we will be discussing all the common Yamaha Rhino 660 problems and the best ways to fix them.

Here’s a list of some of the most common issues with Yamaha Rhino 660 that you may encounter:

Most Common Problems With Yamaha Rhino 660: A Detailed Discussion with Solutions

Wiring issues are common with vehicles. When your Yamaha Rhino stops running, it can be a wiring problem. Plus, misfires may also happen due to bad wire.

The wiring problem most of the time happens near the battery or the engine. If you have experience working with wires, you can use the following solutions.

First, take out the battery. Then check it with a voltmeter to see if the battery is alright. If yes, then you can be sure that the problem is with the wiring.

Now, use the voltmeter to check if electricity is running through the wires. After checking in battery wires, also go for engine wires.

A multimeter will be helpful in the process. After finding out which wire is not working, replace that with a new wire.

Sometimes the shifter may also not work well on the Yamaha Rhino 660. It may get stuck or act unusually. In consequence, you can shift and drive properly with shifting issues.

It can happen due to the shift shaft wearing out. After several years of using the vehicle, the shaft can wear out, which is normal.

Now, remove the case and see its condition. If you see it has worn out badly, you will need to change the shift shaft.

You can order a shift shaft online. However, the shaft is always not available to buy in online stores. You can try eBay to find out a used shaft for your Yamaha Rhino.

Only a few people face this problem in their Yamaha. Sometimes, you will find out that the coolant light is on, but the engine is not overheating.

At first, you may worry about why this is happening, but there’s nothing to be scared of. It usually happens due to damaged gas strap wire.

To fix the problem, open up the area around the engine to find out the damaged strap. Cut the area with a wirecutter. Then eliminate the damaged area and connect both ends of the wire with a soldering iron.

4. Neutral light is not working

After a long time of usage, the neutral light may stop working. You may think that the light is damaged and need replacement. But that’s not the main issue. It mainly happens due to problems in the neutral switch.

You need to find out the neutral switch and fix what’s wrong with it. Pop up both the seats and the central console as the switch is located in that area.

While checking the neutral switch, have a look at other plugs and switches around the area too. Clean them if you find any dirt or corrosion.

Unplug the neutral switch and check what’s the problem. The most probable issue is that there’s corrosion built up. Clean everything, and the neutral light should work again.

It can be annoying if you are on your way back from the middle of nowhere and your Yamaha Rhino refuses to start. Yes, it can happen. A damaged battery is the main culprit here.

Plus, if you are getting your Rhino out for driving after a long time, then you may also face starting issues. A lack of maintenance can cause this problem.

First, clean your vehicle properly. Clear the dirt and the debris ins and outs. Then try to start the Rhino 660.

Engine malfunction is one of the most common issues with off-road utility vehicles. The Yamaha Rhino 660 is not out of the list.

The 660cc liquid oil-cooled engine in the Yamaha Rhino is outstanding. But due to too much pressure or problems in the crankshaft, the engine can behave unexpectedly.

Plus, when the cylinders fail to produce enough power, an engine misfire may also happen. Troubleshooting Yamaha Rhino 660 is necessary to solve the problem.

Start by checking the piston slap. If it’s okay, move on to inspecting the crankshaft. Replace whichever part you find faulty. That should solve the engine issues.

The idle problem happens to the reconditioned Yamaha Rhino 660. Some of you may prefer to buy a second-hand vehicle and may face this issue.

It means the vehicle will start fine in the beginning. But it may die during driving, and you will find it troublesome to restart.

It is tough to point out an exact reason for this problem. You better take it to the dealer or a mechanic for fixing. The whole vehicle may require treatment to solve the issue.

A big problem with the Yamaha Rhino 660 is it is prone to suck dirt. Many users have complained about this.

The UTV is made for driving on rough tracks. Therefore, there obviously will be dirt. But if they get inside the vehicle, that can be problematic.

Too much dirt can cause issues around the engine area. It can also damage the pistons, valves, and similar parts.

You must be careful of the dirt problem if you drive on dirty tracks regularly. The best solution to this problem is regular maintenance.

Every day after you return home with your Yamaha Rhino, clean it properly. Do not only brush the outside but also eliminate dirt and debris from the inside too.

Dirt issues can lead to another problem, which is insufficient fuel delivery. When debris gets inside the air filter, it becomes dirty. As a result, the fuel does not transport smoothly.

Due to inefficient fuel delivery, the Yamaha Rhino 660 may perform below average. You may not get good enough speed while driving.

Although air filters are for filtering out dust, they can not handle too much dust. Hence, your attention is required to solve the problem.

Try to clean the air filter every few days if you regularly drive on dirt trails. Replace the air filter if it fails to perform well even after cleaning. These will solve the insufficient fuel delivery problem, and your Yamaha Rhino 660 will again perform superbly.

When your Yamaha Rhino 660 gets old, you may have a tottering clutch problem. It is not a common issue, but you should be aware of it. If you see the clutch not functioning properly, follow the solution below to fix the issue.

The solution to the tottering clutch problem is super easy. First, clean the clutches inside out properly. Then put some grease in them to make them smooth and function well.

Are Yamaha Rhino 660 any good?

Answer: Yamaha Rhino 660 is an excellent off-road vehicle out of the box. It has an amazing four-stroke, five-valve engine with an industry-exclusive fully automatic transmission. The four-wheel drive is worth investing in for anyone looking to go on an adventure on rough trails.

Answer: The Yamaha Rhino 660 is quite fast. The maximum speed for the vehicle is around 35 miles per hour. It goes pretty smooth on rough roads.

Answer: The 2006 Rhino is Electronic Fuel Injected. It ensures optimum performance in every condition and on every track. Users have been satisfied with how the Yamaha Rhino performs in tough situations.

What year did Yamaha make the Rhino 660?

Answer: Rhino 660 is quite popular among off-road adventurers. Yamaha made Rhino 660 from 2004 to 2012. They made minor upgrades from year to year, and the model is still popular today.

These were some of the most common problems with Yamaha Rhino 660. Let’s have a quick look at the problems before wrapping up:

Overall, the Yamaha Rhino 660 is a great vehicle and worth the money. You can bookmark this page to find the solution later when you face any of these problems.

Most users of the vehicle are satisfied with its performance. If you can deal with these minor issues, Yamaha Rhino 660 is a fantastic choice for you.

So you just bought a UTV? That’s amazing, and I can assure you will enjoy driving it for your intended use and more because UTVs are very versatile. If you are planning to buy one or better still...

There is no objection that head protection is the first safety measure you have to consider whenever you want to ride. Using your helmet alone might not be enough to keep your face safe and that...