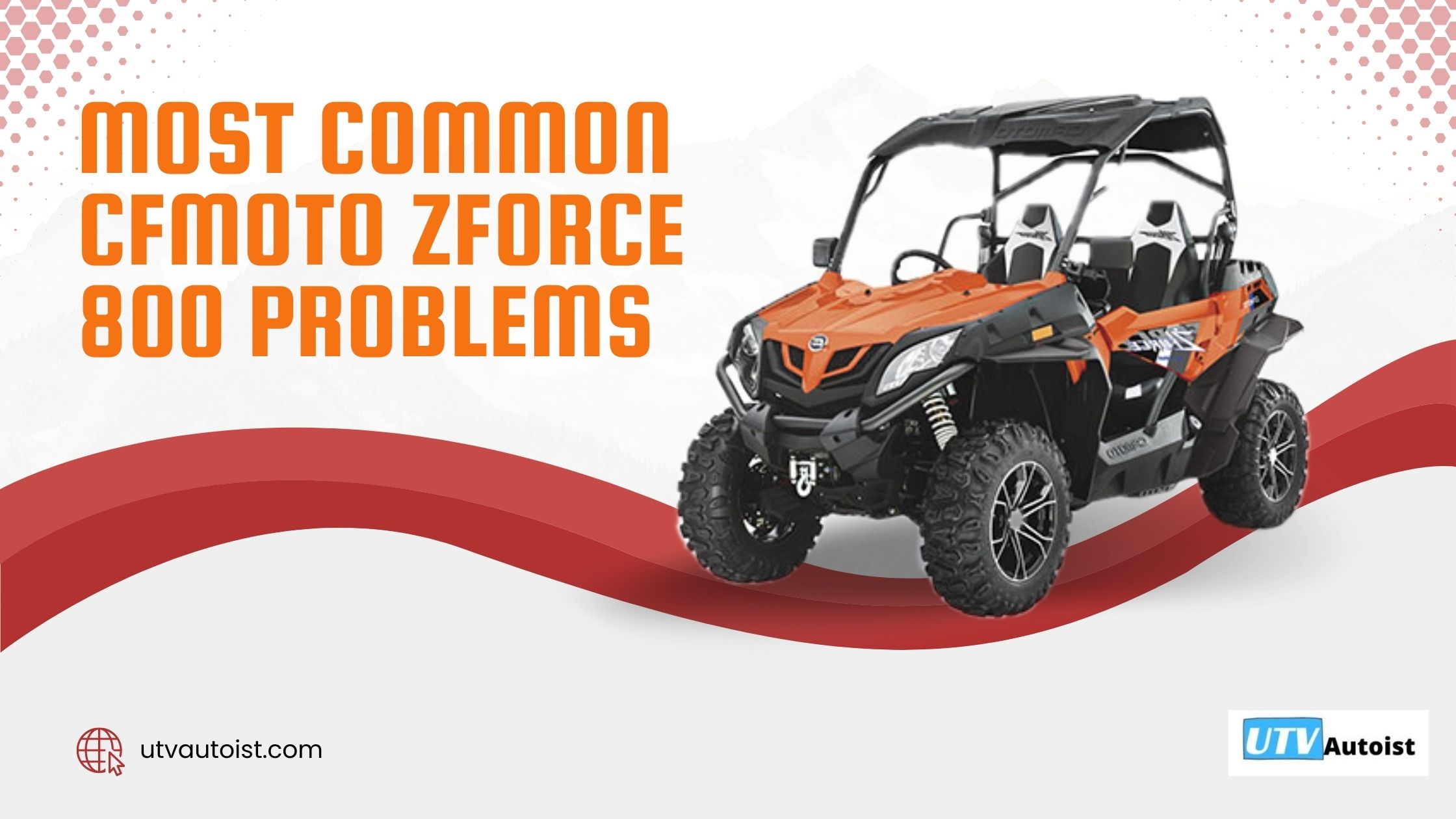 The CFMoto ZForce 800 comes with a solid build quality to perform excellently on rough terrains. It has a premium adjustable shock, 11.8 inches ground clearance, and 60 inches performance stance.

Overall, it’s a great choice for going on off-road adventures. But like all other UTVs, it has some issues that you should know.

Some of the most common CFMoto ZForce 800 Problems are power loss, rough idling, transmission issues, and bad engine noises. The good thing is that all of these problems have easy fixes. Not to mention, you may never face these problems with proper maintenance.

Today I will be discussing all the common CFMoto ZForce 800 issues and explaining how to fix them.

Here are some of the most common issues you may face with your CFMoto ZForce 800:

If you are installing extra LED lights in your CFMoto ZForce 800, you may face electrical problems. The vehicle may not start or keep stopping after starting.

Sometimes it is faulty wiring that causes electrical problems in ZForce 800. But in most cases, it is the battery to blame. The battery has gone down, and that’s why you can not start the UTV.

to check the condition of the battery. If the battery is bad, change it to run your ZForce 800 again.

Yesterday your CFMoto ZForce 800 ran like a horse. But today in the morning, when you try to go on an adventure, the vehicle is not starting. It seems to have zero power. What’s wrong with the ZForce 800 UTV?

The most probable cause is there must be something wrong with the main fuse and its holders. They often go bad on this particular model of CFMoto.

You will find the main fuse under the seat. Check for the wirings and holders if they are all connected well and if the fuse is working or not. If you find any fault, fix it and get the power back.

Also, check the distribution fuse and the kill switch for the GP. Fixing these issues should solve the CFMoto ZForce 800 power problems.

It feels annoying when your UTV starts and stops immediately. This is a rough idling problem that is common to most vehicles, including the ZForce 800.

If you are facing rough idling issues in your vehicle, start with checking the battery, as I explained above. If there is anything wrong, fix it to have a smooth idle.

If the battery is fine, then there must be something wrong with the throttle cable. It may be bad, or there may be a faulty connection. Reinstalling the throttle cable should fix the idle issues in ZForce 800.

Besides rough idling, you may also face poor idling issues with your vehicle. An idle speed of around 1300 RPM at operating temperature is optimum level for the ZForce 800. If you get abnormal speed, you must take action ASAP.

Due to the fuel injection system, there is no way to adjust the idle speed at home. It must be done in the factory. Therefore, contact your dealer to fix the poor idle speed of the ZForce 800.

The CFMoto ZForce 800 has an excellent air filtration system. But after a long time of use, particles or dirt may build up inside the air filter pipe.

If you see light smoke coming out from the crankcase or not getting enough speed from your vehicle even after changing oil, the problem is with the air filter system.

Open the air filter and see if the pipe is dirty. If yes, then clean the line to get optimum performance from your vehicle. Try to use a good air filter cleaner such as the K&N Air Filter Cleaning Kit

Regular maintenance will keep such problems away. Try to use good quality oil and clean the air filtration system regularly, and you may never face this problem in your ZForce 800.

The review for the CFMoto ZForce 800 has been excellent. But sometimes, the acceleration may fail to deliver a good performance. It mainly happens in older vehicles but can also be found in new UTVs.

The most common reason why this happens is the bad gas or bad throttle position sensor. If you regularly drive in dusty areas, you may face such problems.

Check the fuel lines, air filter, and throttle cable to find the problem. Then fix it, and you will get fantastic acceleration once again.

Brake performance of vehicles is crucial as it is related to safety. The CFMoto ZForce has a good quality braking system. But sometimes you find that it is stopping slowly after you go for the brakes.

Most drivers tend to replace the brakes immediately to fix the issue. It’s an easy, quick, and best solution to the problem.

But the most economical solution is to bleed the brakes. It means to get rid of all the air inside. Then change the brake fluid. Doing these things will fix any braking issues in the CFMoto ZForce 800.

Problem 8: Difficulty in starting the engine

During the winter or on a hot day of summer, you may find it difficult to start the engine in CFMoto ZForce 800. It happens due to abnormal temperatures.

If the engine is too cold, turn on the ignition and keep the engine on for a while before you start driving. It will warm the engine and fix the problem.

In case it’s too hot, keep the engine off for a few minutes to cool it down. Then start the vehicle, and it should be ready to go absolutely fine.

If loud knocking or squeaking noise comes from the engine, then it may have some serious problems. Do not try to restart the engine until you are sure of the issue.

Bad engine noise in the CFMoto ZForce 800 may come due to valve train, oil filter, bearings, or pressure sensor issues. Check all these systems in the four-wheeler and fix the problem.

Also, check if there is anything wrong with the clutch. If you fail to identify the problem, the best way is to visit your dealer with the vehicle.

A transmission problem is another issue you may face with your CFMoto ZForce 800. In such cases, the engine will start, but the power will not reach the wheels.

The transmission or shifting problems in the ZForce 800 can happen due to faulty shift gates. Check for the shift gates, and you may need to change them to fix the issue.

The CFMoto ZForce 800 has a standard clutch. CVT noise is uncommon in the vehicle, but if you feel your ZForce 800 making abnormal sounds, there may be something wrong with the rear axles.

Try to test your UTV with different oils to be sure of the problem. If it continues to make noises, you will need to fix the axles. Plus, adjusting the differential casing can also help to solve the issue.

As it has been seen in many CFMoto ZForce 800, the gearbox is often worn out or does not engage properly. It can create problems like CVT noise. Replace or fix the gearbox to eliminate the abnormal sound.

The CFMoto ZForce 800 has a fantastic shock absorption system. If the vehicle starts shaking or bouncing at the speed of 20 mph above, it indicates a wheel run-out problem. A faulty rim, tire mounting, and improper seating are some of the common wheel runout issues. It can happen to both the front and rear wheels.

Spraying silicone sprays often helps to fix the problem. However, the best solution is to rotate the wheels and tires in different positions and tighten them well. Doing these things should fix the severe wheel run-out problems.

Although CFMoto accepts that it’s a factory issue, they have not done anything to fix the issue. What you can do is grease the parts before every ride.

Many drivers have faced the loss of power steering after driving only 200 miles with their CFMoto ZForce 800. The dealers have said that it’s due to a design flaw. The steers may behave weirdly, or EPS may stop while making a turn.

Replacing the ECM fixes these issues in ZForce 800. However, to avoid the problem in the future, try to keep low pressure on the shifter while getting on or off the throttle. If you operate the vehicle softly, it will also perform smoothly.

Engine overheating is a common problem with almost all 4WD ATVs and UTVs. The more pressure you put or the longer you keep the engine turned on, the hotter it may get.

To fix the issue, inspect the cooling system, water pp, and radiator. Identify where the problem is and fix or replace the parts. It will prevent your vehicle’s engine from overheating.

Answer: The CFMoto ZForce 800 has a solid build quality with a superior functional design. It is a good off-road vehicle to go on adventures on rough trails. Its high-quality wheel and shock absorption system make the ZForce 800 a perfect choice.

Answer: CFMoto is a reliable brand, and their ZForce lineup is one of the best. You should buy a CFMoto if you want to have an excellent off-road driving experience without spending too much.

Answer: The CFMoto 800 ex goes at a top speed of 65mph. Its 80 inches wide wheelbase ensures that you have a smooth driving experience at high speed. Plus, the hydraulic brakes allow you to stop immediately whenever you want.

Answer: The CFMoto 800 has a 62HP engine at 6700 RPM. It’s a V-Twin, 8-valve, SOHC, 4-stroke type engine. The overall engine performance of the ZForce is smooth and reliable.

These were some of the most common CFMoto ZForce 800 problems. To sum up, here’s a quick recap of the vehicle issues:

I have tried to explain all the problems with proper solutions throughout the article. You should not have any other problems with your CFMoto ZForce 800.

If you are confused about whether to buy the UTV or not, I suggest you go for it. Although the list seems long, almost all of the problems occur due to improper handling of the vehicle. Regular maintenance will keep such problems away.

Most of the CFMoto ZForce owners are happy with their purchase. It performs excellently well and is the perfect choice for all kinds of off-road enthusiasts.

So you just bought a UTV? That’s amazing, and I can assure you will enjoy driving it for your intended use and more because UTVs are very versatile. If you are planning to buy one or better still...

There is no objection that head protection is the first safety measure you have to consider whenever you want to ride. Using your helmet alone might not be enough to keep your face safe and that...