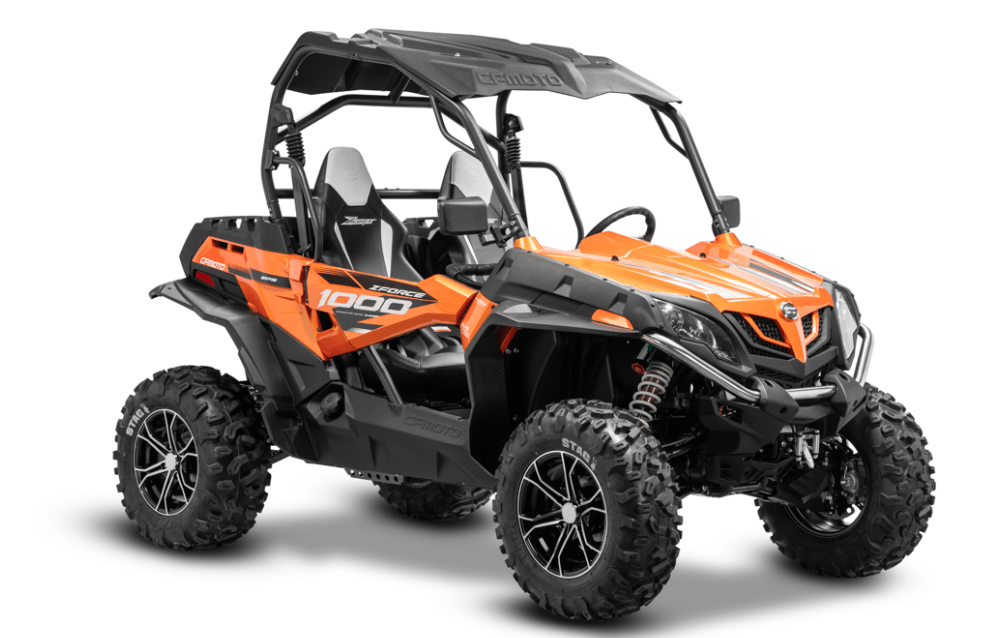 Cfmoto zforce is indeed a force to reckon with when you are looking for high adventure ATV for top-quality performance. Cfmoto is known in the industry for the production of great ATVs that can handle off-road challenges with a blast and cfmoto zforce 1000 is a model that gives satisfaction on all fronts.

The cfmoto zforce 1000 boasts of lots of improvement to the zforce 800. It has V=twin power, new multi-link suspension, enhanced frame for rigidity and strength, dual A-arm on the front and it has limited-slip differentials which help to ensure you get the right traction to the ground.

This High-Performance vehicle is built to successfully handle any off-road adventure thereby delivering great performance and comfort needed to enjoy your ride whenever you handle or operate the vehicle. For those in search of a satisfactory machine, you’ve got the perfect choice to invest your money.

The cfmoto zforce 1000 is a great improvement to the previous model and that is obvious in all aspects especially in its Kiska design. It has indeed undergone a thorough transformation and it comes with lots of features which makes it appealing for consideration.

The zforce 1000 has 2WD and 4WD with a front differential lock, and you can easily access it through a touch of a button. The machine is powered by an all-new 962.66cc V-twin, eight-valve, the four-stroke motor with a 91 x 74mm bore, and a stroke with a compression ratio of 10:6:1.

The machine comes with 14 inches alloy wheels with extra-large 19 inches CST stag tires that can handle mud, wet, dry, and all kinds of trails. It has an 8-ply rating which means the tire can handle off-road challenges easily.

The motor of the zforce 1000 can produce 60.5ft/lbs. of torque at a speed of 6200 rpm. It is one of the machines designed for fun. Also, the electronic power steering is light and easy to operate. Also, the zforce 1000 has 310mm ground clearance to get rid of obstacles easily.

Furthermore, it has a curb weight of 610kg and the tank holds 27 liters of fuel which will get you in motion for a very long period.

Difference between the models

With the new 2019 model zforce 1000, it comes with 963cc V-twin and it produces 79 horsepower through the CVTech clutch, 27 inches tire on 14-inch alloy rims, compression, and rebound adjustable shocks.

THE zforce 1000 comes a bit higher in pricing than other models. It is within the range of $15,000 and above depending on the dealer you are getting the machine from. The pricing is justified with the upgrade to some parts and some improvement to the features.

The pricing of the other models is as follow:

The zforce 1000 is in the category of a 60-inch class machine. The machine is 113 inches long and it has 80.3 inches wheelbase. The wheelbase is what makes it a bit longer than its competitors such as the RZR s line Polaris and Can-Am Maverick sport.

The zforce 1000 has a dual wishbone setup and the front and back with its gas-charged shock which makes it efficient for rebound and compression adjustments. Also, the rear has 280mm of travel while the front has 283mm.

The suspension makes the machine so smooth and easy to ride. It makes it take up any road condition with a blast and ensure the rider feels convenient and comfortable.

Shifting gears operate with a CV-TECH IBC belt-type of transmission which is known to be a new transmission that works for CFMOTO 2018. It has a primary and secondary dry clutch variable for consistent performance. One of the values CFMOTO is working hard to promote and uphold is reliability with their machines and devices, which is the reason they are creating a vehicle that runs effectively, just the way you want it to.

Your comfort and convenience are not overlooked which is the reason Cfmoto ensures the zforce 1000 comes with adequate support needed for you to sit comfortably without feeling any pain or stressing your neck and back muscles.

Also, you’ve got a smooth steering wheel which is handy and easy to operate, the dashboard as an indication screen to show you all information about the vehicle such as the speed, the fuel level, temperature and many more.

Also, it has Bluetooth for phone connectivity, a horn, and a large color TFT display.

Every part of the zforce 1000 comes with a standard design and touch. From the stainless-steel bumpers, quality exhaust, 3000-pound rated winch, Modern Led lighting, economy and sport power modes, side mirrors, and roof kits. With the design and the alluring appearance of the zforce 1000, it is a great ATV for all.

Cfmoto zforce 1000 comes with all amazing features that make it quite hard to turn down. It comes with an upgrade on all fronts which makes it takes every off-road challenge with a blast. It clearly shows cfmoto is improving on all fronts and the Zforce proves that clearly to all.

It is a machine that can handle trails, mud, and sand easily without hassles, the suspension is superb, the steering wheel is smooth and easy to control, and many more. If you are familiar with the previous model, be assured the zforce can offer you double what they can offer. That is not hype.

link to Making A UTV Street Legal: The Ultimate Guide

Have you ever wanted to drive your UTV on the road? UTV lovers have always wanted to drive their beloved vehicles daily. If you own a UTV and love to ride it, you know exactly what we are talking...

Continue Reading
link to How much does a Polaris ranger weigh? (with 11 examples)

Ranger vehicles have been somewhat a source of attraction to a lot of people. Especially for off-road enthusiasts, the ranger is something out of heaven. Having several types, the weight of ranger's...